The Pardon of Assisi, the plenary indulgence, can be received on August 1st from noon until midnight the following day, at the church of the Portiuncula and in all parish and Franciscan churches. Father Ermes Ronchi: "Moments like this put us in touch with the infinite mercy of God and remind us that everything is grace”, but at the same time we are called to “be forgiving of others." Forgiving  “is not an act of weakness but of faith"; forgiveness is “the gift” par excellence that can create "small oases of peace”

It is possible to gain plenary Indulgence in any public church or oratory in the world beginning August 1st, from noon until midnight today (August 2), or by visiting the Portincula church in Assisi, where Saint Francis died and where Pope Honorius III offered Francis a document of the Indulgence on August 2 1216 following the Saint’s vision of Christ and the Virgin Mary surrounded by angels. Of all the things Francis could have asked the Holy Father for, he requested a broad pardon with a complete remission of all sins, to all those who, repented and confessed, entered the church. Initially the indulgence could only be received by visiting the Portiuncula church. It was eventually extended to all Franciscan churches and subsequently to all parish churches. Pardon may be granted to the person requesting it or to a defunct relative of the requester by meeting the following conditions: make sacramental confession; attend the Holy Mass and recite “Our Father”, one Apostle’s Creed and receive Holy Communion; pray Our Father, Hail Mary for some time according to the intention of the Holy Father, and finally visit a church or a Franciscan oratory or any parish church. But what is the value of this practice today? In an increasingly individualistic society with conflicting logics, where the law of the strongest seems to prevail, does it still make sense to speak of forgiveness? Why is it so difficult to forgive and be forgiven? We asked Father Ermes Ronchi, of the Order of the Servants of Mary, chosen in 2016 by Pope Francis to lead the Spiritual Exercises of Lent for the Pope and the Roman Curia. 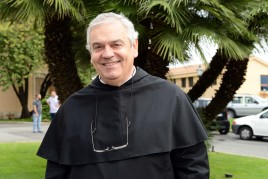 Contacted by phone in Patmos Island, the theologian promptly clarified that

“Forgiveness is not an act of weakness; it’s an act of faith”,

it’s an act of faith in the fact that the other person can change. Forgiving means believing that the person who hurt us has the potential to be a different person. God forgives us because his gaze extends beyond; He sees the springs of our winters. Forgiveness is

an act of trust and hope that by planting small oases of peace these will slowly change history’s desert.

Why is it so hard to forgive?
Because we believe that all is due to us: love, respect, esteem, admiration. We are disappointed when someone fails to give us what we expect. In reality we are not creditors but, as the Word of Jesus says, debtors, guests, and we must be grateful for this. Only then will we be able to forgive, only if we accept that we are part of a whole made of things bestowed. If we fail to understand that the main pillar of the universe is the gift received from God, we will continue to struggle. We are also overly attached to the past, while forgiveness looks at the future: it frees a person’s future and that person can thus resume peaceful and harmonious relations with me; it is an act of faith in the future, in history, in the world.

What’s the semantic relationship between “giving” and “fore-giving”?
Forgiveness is a great gift, in fact it’s “the gift” par excellence. It’s the ability to renounce revenge and offer the other person a liberated future, giving it new thrust not by whitewashing the past but through the beating of wings, like a rush of wind in the sails of his life.

Also asking and receiving pardon is difficult. Why?
To ask for forgiveness means to have grown in wisdom and awareness of who we are and what we have done. We are not always aware that we might have hurt someone, that our actions may have caused suffering. To forgive is to recognize one’s own mistakes and be committed to change; it’s an act of humility. But this entails also a greater effort.

Which?
To forgive ourselves. Some people punish themselves to the point of self-destructiveness. We all have open wounds. If we don’t protect them with the balm of faith and hope, they will continue to hurt until they become infected. I can be different; I know I am a sinner, but this awareness can make me more merciful. If I can forgive myself, I can forgive everyone else.

What is the topical relevance of the Pardon of Assisi?
The Pardon of Assisi, plenary indulgence, puts us in touch with the infinite mercy of God, making us aware of the importance of forgiving ourselves and others. Moments such as this remind us that everything has been bestowed upon us, everything is grace. God is not deserved, He is received; forgiveness is not deserved, it is received. The most beautiful things bestowed from on high are not our own achievements. They must be awaited. In fact ,

Today I await God’s indulgence on my wounds, on my struggles, on my tears, and in turn I pledge to extend it to others

For the essence of Christian ethics and moral code is to do unto others as God does unto me.